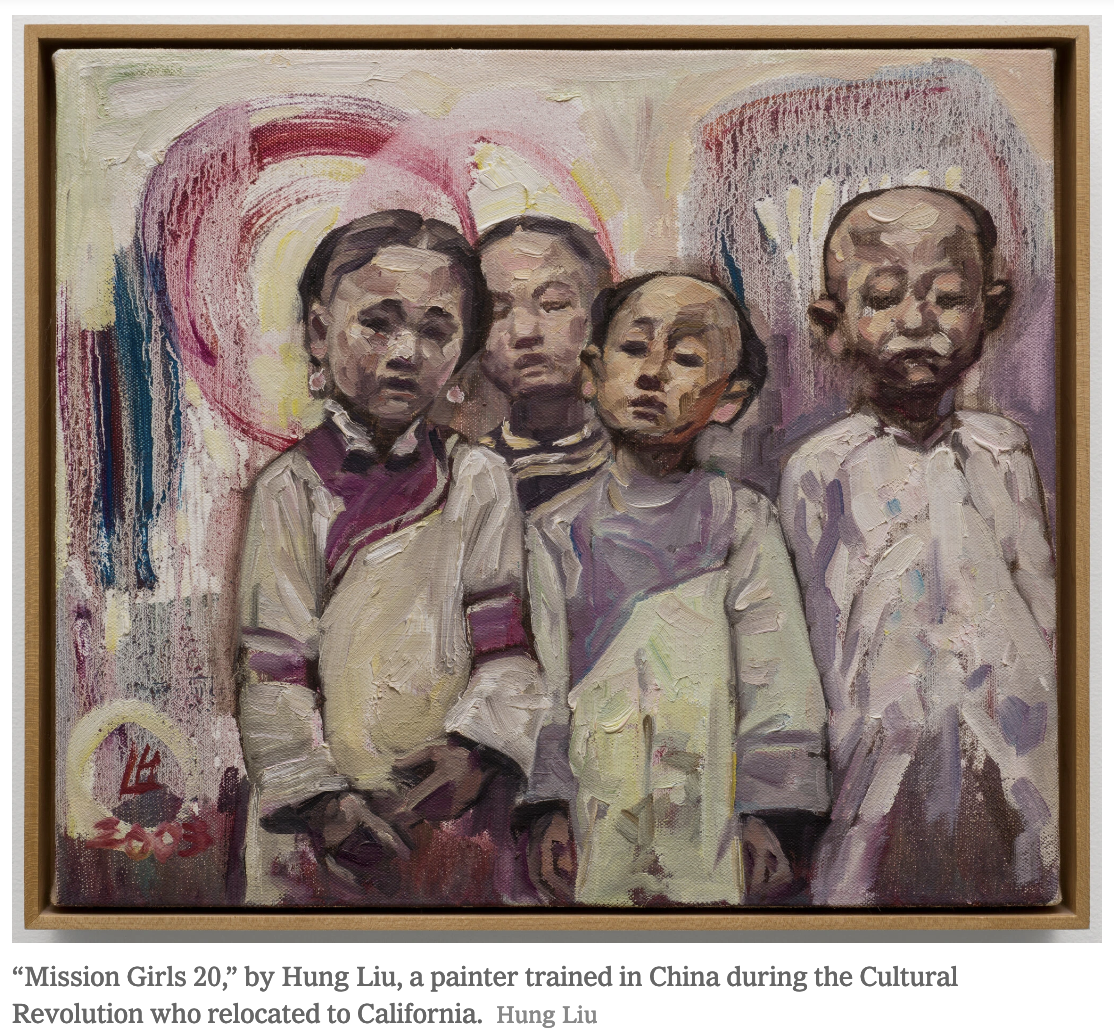 At some point early in the past pandemic year and a half, with the art calendar tanking — museums shuttered, galleries closed — I felt myself switch into optimist mode. I began to see the disruption not as a setback but as an opportunity, an enforced readjustment of balances. A new normal that’s actually new.

Sure, some big shows got canceled by Covid-19, or postponed, or shut down. But blockbusters will always be with us. I’m looking forward to one delayed from last season, “Jasper Johns: Mind/Mirror,” a career retrospective of the studiously mystifying artist that will stretch over two institutions, the Whitney Museum of American Art and the Philadelphia Museum of Art, this fall. (Sept. 29-Feb. 13, 2022).

But I’m also anticipating with even more pleasure two smaller solo surveys by artists less widely celebrated. One, “Hung Liu: Portraits of Promised Lands” at the Smithsonian’s National Portrait Gallery in Washington D.C., is the first substantial East Coast look at a California painter who trained in China during the Cultural Revolution, came to the United States in 1984, and turned a Socialist Realist style into a meditation on the psychic complexities of the immigrant experience. (Through May 30, 2022).

“Yolanda López: Portrait of the Artist” at the Museum of Contemporary Art San Diego is another long-overdue career tribute (Oct. 16-April 24, 2022). With roots in the Chicano Art Movement of the 1970s and 80s, Lopez has produced anti-colonialist, pro-feminist work of tremendous warmth and vitality. Her 1978 self-portrait painting as a marathon-running Virgin of Guadalupe is one of the great images of revolutionary joy.

(Both Liu and López died this summer, just weeks before their exhibitions opened.)

The season brings a bounty of museum group shows of work by women. From California, which gave us the benchmark 2007 “WACK! Art and the Feminist Revolution,” come two: “New Time: Art and Feminisms in the 21st Century” at the Berkeley Art Museum and Pacific Film Archive (through Jan. 30, 2022), and “Witch Hunt” at the Hammer Museum and the Institute of Contemporary Art in Los Angeles. Originally scheduled to coincide with the 2020 presidential election, the Los Angeles show will include work by transgender artists (including the redoubtable Vaginal Davis) which “WACK!” left out (Oct. 10-Jan. 9, 2022).

The past decade has given us reason to wonder whatever became of the internationalist art energy of the 80s and 90s when, it seemed, everybody was looking at everything on the planet and generosity was the vibe. There are a few marquee-scale “non-western” shows this season: “Afro-Atlantic Histories,” traveling from São Paulo, Brazil to the Museum of Fine Arts, Houston, is a major one. But, overall, the numbers are thin, so it’s to smaller shows of unfamiliar material that we’ll look to for a global perspective.

We’ll find it in “Bamana Mud Cloth: From Mali to the World” at the Dallas Museum of Art, which traces the history of an ancient West African textile tradition into the present, and promises to be a delight to both eye and mind (Nov. 13-Dec. 4). So does “Mixpantli: Space, Time, and the Indigenous Origins of Mexico” at the Los Angeles County Museum of Art, which proposes to illustrate how the Spanish Conquest inspired native populations in Mexico to invent a New World of their own (Dec. 12-May 1, 2022).

At a time when post-Civil War Black history is being rewritten, museums in the American South are doing extraordinary things. In 2018, the telling of that history took a big leap with the inauguration of the Legacy Museum: From Enslavement to Mass Incarceration, created by the Equal Justice Initiative in Montgomery, Ala. A larger version of the museum — four times the size of the original and with a significantly expanded contemporary art presence — is set to debut on Oct. 1.

I’ll also be checking out “Movement in Every Direction: Legacies of the Great Migration,” an exhibition commemorating the resettling, from the start of the 20th century into the 1970s, of more the six million African Americans from the rural South to cities across the United States. The show, made up of work commissioned from a dozen Black artists with Southern ties, including Mark Bradford, Theaster Gates and Carrie Mae Weems, has been organized by two venturesome institutions, the Mississippi Museum of Art in Jackson (where it opens in April 2022), and the Baltimore Museum of Art (where it opens in October 2022).

And venturesome is what art institutions need to be in a time when the pandemic continues to morph and — the 2020 census tells us — the American population continues to shift.

Among Black migrants heading north in the 70s were contemporary artists who found no place to land in an overwhelming white New York art world until a young dealer, Linda Goode Bryant, created a welcoming gallery and helped change the country’s cultural landscape with her Just Above Midtown gallery in Manhattan.

Bryant is still hard at work. I’m eager to see what she’ll do in “RAW Académie Session 9: Infrastructure,” a project she’ll be directing at the Institute of Contemporary Art, Philadelphia, beginning in February 2022. RAW Material Company, based in Dakar, Senegal, is one of Africa’s leading experimental art spaces. For the project, RAW’s Dakar staff will temporarily join Bryant and an international roster of curators and artists in Philadelphia to brainstorm on how museums can become more useful to artists and audiences alike in a world in flux.

There’s no predicting what kind of show — if there even is one — will result. And unpredictability is the positive starting principle behind another institutional initiative this season, “Year of Uncertainty” at the Queens Museum.

A response to the challenge to “normal” created by the Covid crisis, and an assertion of the proposal that “not normal” can be a healthy direction to take, the museum will call upon Queens political activists, community organizations and the local public — along with its own artists-in-residence — to shape what the institution does and whom it serves.

In the process, definitions of art, audience and museum will all be up in the air. What kind of shape they take when they land, who knows? But I want to be there when they do.